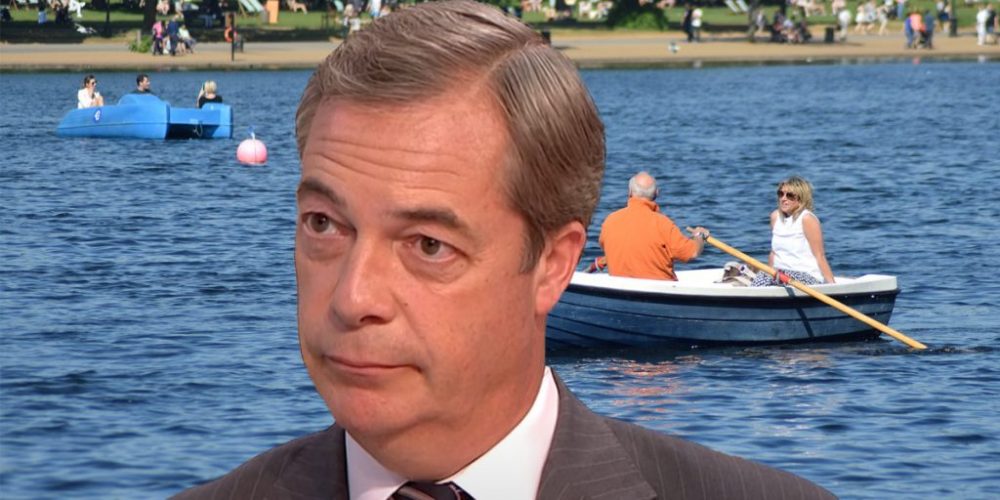 LONDON - The pleasure boat rental business was thrown into heated debate yesterday when the role of the man timing the duration of customers leisure trips at Hyde Park was offered to everyone's favourite busy-body Nigel Farage.


It's been a tough search, as Hyde Park officials try to find the right person to shout abuse at individuals boarding flimsy boats in precarious conditions, but they believe Nigel's popular daily reporting, lambasting desperate people, taking life-threatening journeys in the slim hope of a better life has uncovered the ideal candidate.


"For years we've been looking for someone good with binoculars, a keen sense of time keeping and with excellent sea legs", stated Colin Collinson (55), head of Aquatic Chronologically Measured  Pastimes in Hyde Park, "Nigel's excellent xenophobic, 'Little England' approach, coupled with a complete lack of empathy are just what we need, to keep on top of those who flagrantly ignore the one hour time limit of their boat hire"


Mr Farage was said to be initially uninterested in the post, until he discovered it came with a smart park keepers uniform, complete with name badge and peaked cap.


"It's not about the money", the former MEP claimed when describing the role of officiating water based recreational  activities, "After all, I've my six-figure pension from being an MEP to fall back on. No, this is about bringing my unique skillset of shouting at people in boats to a  new audience, whilst wearing military style apparel"


Mr Farage's former number two, Anne Widdecombe, is thought to be really keen on the role of boating  assistant, particularly as Hyde Park  is only 16 minutes tube ride, to the nearest Marie Stopes clinic, that she can then protest outside of.


"We look forward to Nigel taking on the post", Mr Collinson (still 55) stated, who bizarrely commutes from Barton Stacey everyday by land yacht, "But the best thing will be the operational savings as we understand Mr Farage doesn't require a megaphone"
Back To Daily Dafty Portfolio